Connecting to school and each other: Towards a new paradigm of a school response to mental health 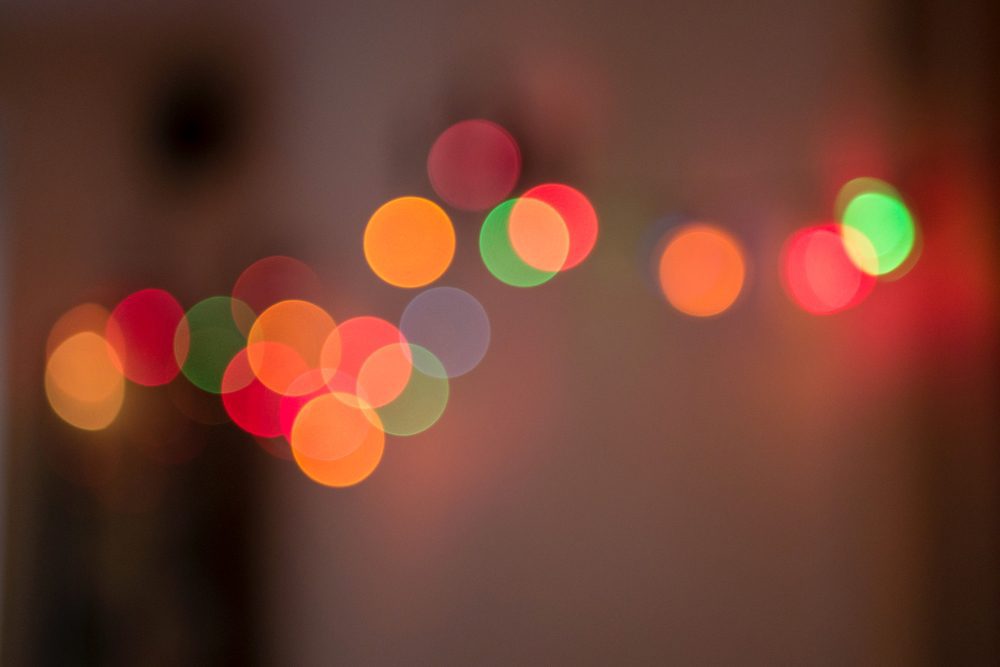 Where are we now? The landscape of mental health and schools

The lesson is that the goals of schooling must include social features as well as the transmission of information.

We have known for a while that school has a significant impact on young people’s later development, quality of life and mental health, and is especially important for socially, academically and emotionally vulnerable young people. Rutter’s (1991, p. 9) research demonstrated the protective role of schooling and the danger of splitting the cognitive and social elements of schooling, as both these features impact on scholastic attainment and ‘influence what happens afterwards in a child’s life in a complicated set of indirect chain reactions’. Key elements in good school experiences develop self-efficacy, meaning ‘People’s beliefs about their capabilities to produce effects on their life and context’ (Bandura, 1994, p. 71), and necessary cognitive competences and attitudes, such as persistence and reading ability. All students benefit but it is critically important to vulnerable groups: ‘it is those children who most need what good schools have to offer and it is fortunate that often they seem to be the ones most likely to benefit, especially from the broader aspects of schooling’ (Rutter, 1991, p. 8). Gustafson et al. (2010) proposed that young people’s academic performance at school and their levels of mental health and wellbeing are intimately related, and that early school failure ‘can cause marked internalizing and externalizing mental health problems’ (p. 161).

These are now shared understandings, but the interpretations of the research evidence and their underlying frameworks vary a great deal. Two key government documents (DHSC and DfEDepartment for Education - a ministerial department responsi..., 2017; Public Health England and DfE, 2021) share the conclusions above, but there are fundamental issues around the interpretation and use of these principles in education, seeing as they are foremostly a separate set of initiatives in the realm of public health. It is this disjunction that forms the basis for our project and the development of what we consider to be radical and alternative models of practice, underpinned by evidence. This article articulates this position and the aims of the project with some limited early findings.

Why this project? The rationale for a new approach

There are interesting parallels between the development of inclusionAn approach where a school aims to ensure that all children ... in school and the debates around mental health in schools. Current models of developing mental health in schools are based on a medical model of both mental health and intervention, rather than an educational model, which can be substantiated by educational research findings. The latest mental health policy strategy document (Public Health England and DfE, 2021) is an example. The task of the school is to ‘play a vital role in identifying mental health needs at an early stage, referring young people to specialist support and working jointly with others to support young people experiencing problems’ (DHSE and DfE, 2017). This current remedial medical model does not reflect the process or the factors that contribute to children learning about themselves and others from their school experience. Nor does it see the role of the school as one that is active in creating a nurturing environment for children’s development: the key figures are health professionals using the school as a site for intervention. Recent acknowledgement of this comes in the widening of the Programme for International Student AssessmentAbbreviated to PISA, a worldwide study by the Organisation f... (PISAThe Programme for International Student Assessment, a worldw...) measures and the acknowledgement of the importance of what the Organisation for Economic Co-operation and Development (OECD) calls the social and emotional skills (OECD, 2021). Growth mindsetThe theory, popularised by Carol Dweck, that students’ bel... and life satisfaction measures are now included in measurements of the quality of schooling.

An alternative to the medical diagnose-and-intervene model is based on the view that all schooling contributes to nurturing good mental health and development, particularly identity. But what does a growing body of research tell us about the role played by schools in the development of positive mental health? One significant study (Gray et al., 2011) concluded that the components ‘which emerge with considerable frequency include relationships with teachers, relationships with peers and general satisfaction with the educational experience. These all contribute to greater feelings of “school connectedness”’ (p. 103). The overriding message is that ‘the most important factor affecting young people’s wellbeing relates to the cultures of support their schools develop and sustain’ (p. 106). This accords with the view of schools as nurturing environments for the development of good mental health – second only to families. If this were an explicit and consistent aim for education, it would involve looking at four key areas of schooling, which are inseparable.

The first two are belonging and connectedness. ‘Student belongingness’ to school refers to ‘the extent to which students feel personally accepted, respected, included, and supported by others in the school social environment’ (Goodenow and Grady, 1993), and early engagement is central to students’ social and cognitive development (Gray et al., 2011; McLaughlin and Clarke, 2010). Belonging is relational and involves pedagogical approaches, participation in schooling, decision-making, classrooms and modes of assessment. Comparative studies of life satisfaction (Gray et al., 2011) showed that the workload and assessment load of English students play a major role in dissatisfaction with school and compare unfavourably with other rates in Europe. Bullying and other forms of peer/teacher conflict in school have a weighty negative role. The significance of social disconnectedness in school experience has come to the fore in a 2021 large-scale study of 29,086 high school students in Denmark:

The relational world of the school emerges as the next key area of focus. Relationships between students, teachers and students, and the school and its community have been established as substantial in their contribution to the climate and mental health development in schools (McLaughlin and Clark, 2010).

The final key factor is the model or mindset in operation in learning and teaching. Dweck’s (2000, 2017) work on depression and learning shows the far-reaching significance of the mindset that young people develop, which is learned from their early nurturing contexts. A growth mindset, based on a view that problems can be tackled, intelligence can be improved and resilience and effort matter more than a fixed view of intelligence, makes a key contribution to the development of strategies for good mental health. These four concepts are the foundation stones for our project.

This project began in Birmingham local authority (LA) at the invitation of an adviser, but funding ceased, and the project now continues independently. Two schools are primary schools and two are secondary schools; all are judged to be outstanding schools. The intention is to undertake a two-year pilot programme of work, to research what we do, to test the assumptions and to see whether it can be adapted and scaled up. The aims are threefold: first, to develop new evidenced practices to support young people’s mental health development in school, through warranted practices underpinned by research findings and tested out in school practice. This underpins the second aim of creating a developmental, educational model that harnesses the power of the school to make a significant contribution to the social, emotional and personal development of young people. This would be an educational rather than health model. The final aim assumes that we learn how to feel, to act and to assess ourselves in school in major ways and that what young people learn about themselves at school shapes their lives and mental health. This project will help to illuminate what and young people learn and how they learn these things. 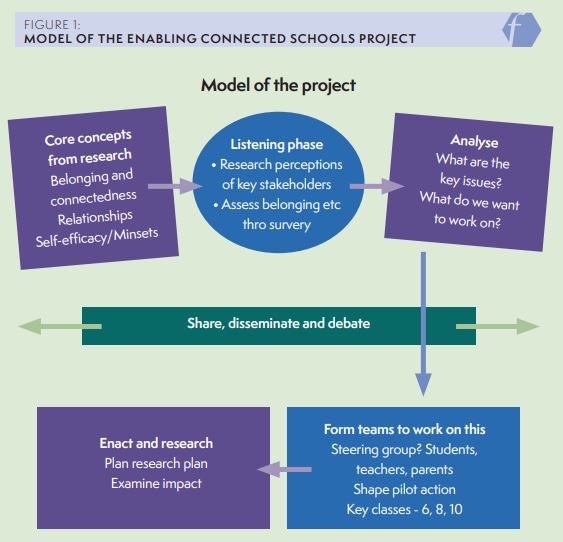 Some examples of early results

We have used a simple action research process. The starting point was the administration of a validated survey questionnaire based on McDermott et al.’s (2020) survey of school connectedness and belonging, Dweck’s (2017) growth/fixed mindset scale and a new general self-efficacy scale by Chen et al. (2001). Our sample was groups of Year 5 ,6, 8 and 10 students in the four schools. The total across all age groups was 423 pupils and 160 staff, who also took the questionnaire. The staff were volunteers, and the pupils were selected from classes that were seen to be representative of the year group. Focus groups of the same classes and year groups were also undertaken, as well as those with teachers and parents.

This qualitative and quantitative data was fed back to the schools, who decided after analysis what area of practice they wished to develop. These current projects are: peer-supported learning; what belonging and success look like in learning; cultural belonging for different groups in school; and developing a sense of belonging for all students. Schools are developing practice within these areas, and the development of the practices in their chosen area are charted and researched. The survey will be returned to at the end and the research shared.

Our survey and focus group results across the four-year groups showed that we do have an issue in our schools with students’ feelings of connectedness:

Teachers, students and parents all confirmed the central importance of the four key concepts, and almost half our students and teachers showed a fixed mindset. We are now in the midst of the action research phase and plan to share the developed practices in this pilot project and seek funding to extend. 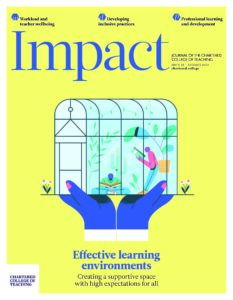