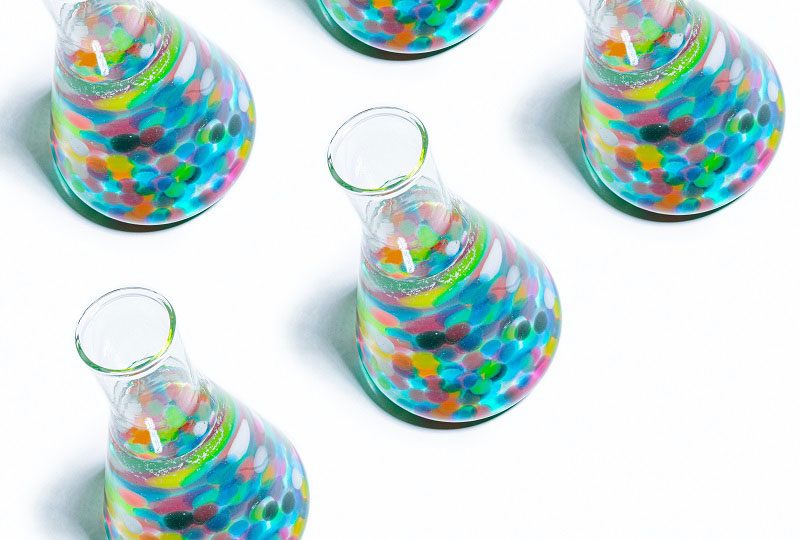 Knowledge is required to think and therefore to learn. Learning has been defined as ‘relatively permanent changes in comprehension, understanding, and skills of the types that will support long-term retention and transfer’ (Soderstrom and Bjork, 2015, p. 176). The long-term retention of learning is a particular challenge in mathematical aspects of Key Stage 5 chemistry. Students are frequently able to answer problems soon after instruction when they all involve the same, recently learned, concept. However, they find it more challenging when problems are presented after a time delay or in a mixture, requiring recall and selection of the appropriate approach.

Dunlosky et al. (2013) assert that the study strategies commonly used by students are not the most effective. My students are resistant to exploring alternative study strategies, probably due to the illusion of knowing (Bjork et al., 2013) that popular strategies, such as rereading and highlighting, can elicit. However, the extensively investigated alternatives of practice testing (or retrieval practice), distributed practice and interleaved practice are strategies that could be applied to improve consolidation (Bjork et al., 2013; Perry et al., 2021), particularly in Key Stage 5 chemistry (Hartman et al., 2022).

Exploration of research identified several factors as important in implementing spaced practice testing, combined with interleavingAn approach to learning where, rather than focusing on one p... (summarised below). A preliminary intervention was designed (see section, ‘The Intervention’), the implementation of which enabled refinement of the identified key ingredients, summarised below, with italics indicating alterations following the preliminary intervention:

Having identified evidence-informed principles relevant to the problem of consolidation, I implemented the following intervention (italics added following the  preliminary trial of intervention):

Following five weeks of the intervention, students completed an end-of-topic test. The intervention cohort (n=12) scored significantly more highly (95 per cent confidence interval) than the five previous cohorts combined (n=70) (Figure 2). Comparable outcomes were expected, as the current cohort performed comparably to previous cohorts in a baseline assessmentWhen referring to early years education, a measurement of a .... Although encouraging, this improvement may not be solely attributable to the intervention, as students have received greater individual teacher attention, with the class size being 56 per cent of the cohort mean.

Figure 2: Comparison of test results between students who have and haven’t undergone the intervention 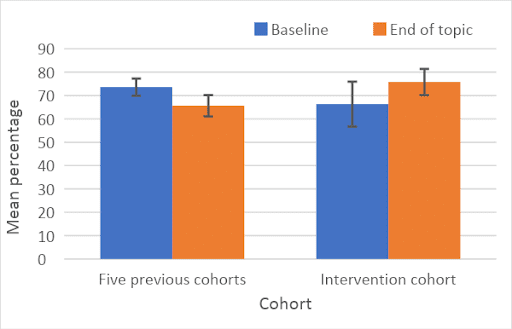 In addition to improved test performance, it was hoped that the intervention would boost students’ confidence in tackling unfamiliar problems. Students’ ratings of their confidence in different problem types increased after the intervention. Although high confidence did not correspond to success in particular problem types in the end-of-topic test, increasing confidence did correlate more strongly with success in practice quizzes. This may be due to the metacognitive effects of highlighting areas where knowledge is less secure, through practice testing with formative feedback (Roediger et al., 2011), which informed more focused independent learning immediately following the practice quiz.

A third desired outcome was improving students’ resilience in persevering with solving problems from memory that they could not immediately answer. This ensures that students retrieve as much as possible to maximise the benefits to long-term memory (Perry et al., 2021). Although students displayed improvement in their ability to solve all types of mathematical problems independently, this has not affected the way in which most approach problems outside of the classroom (frequently relying on notes or peers, rather than persevering with recall), reinforcing the importance of classroom administration to secure the benefits of retrieval (Yang et al., 2021).

Although limited in scope and time, this intervention has highlighted some important principles for successful consolidation of learning through spaced retrieval practice, in addition to those identified from research:

The work described was completed as part of my Master’s in Expert Teaching, delivered by Ambition Institute in partnership with Plymouth Marjon University.