Why decolonise and diversify the curriculum?

This case study is part of a series of short online learning courses on decolonising and diversifying the curriculum. Chartered College of Teaching members can access this learning for free.

This is a case study from Module 3 of a series of 6 online courses where participants address the question, why decolonise and diversify the curriculum? The module includes case studies as well as reflective exercises encouraging participants to consider their own context and determine their next steps for this work.

In this short video, we hear from Louise Jaunbocos-Cooper, a Deputy Headteacher in Trafford, about how they’ve shaped decolonising and diversifying the curriculum work in their context.

Hello there. My name is Louise Jaunbocus-Cooper. I’m a deputy head teacher at a large school in Trafford, just outside Greater Manchester. One of my job remits is to lead on equality, diversityThe recognition of individual differences in terms of race, …, and inclusionAn approach where a school aims to ensure that all children …, which I’m extremely proud to do. And I’m here to talk to you today about that work, particularly in my context.

Despite being around a huge city that is very ethnically diverse, the school is quite unique in that we’re about 85 per cent white British. Now that comes with its own difficulties and own nuances that you have to really think about in your delivery of the curriculum. But what I’m about to say will also apply in any school.

So one of the reasons why diversification and decolonisation of our curriculum is so important in our setting is… and I will encapsulate it in one phrase… that sense of belonging. One of our values as a school is community. Yet through my work training over 400 anti-racism ambassadors last year as part of our anti-racism programme, I came to talk to students about how they were really feeling. And by creating that safe space, they were able to open up to me. And this is why this work is so important to us.

Now one thing I found was the appreciation of the students who receive the curriculum and how they might feel. So I’ll raise two issues that I think will be quite interesting. One… and I will use history as a context because I am a historian. But, for example, we teach the slave trade in Year 8. And from speaking to our students and reading about this sense of ancestral trauma, and this will be more deeply felt when you are the only person of colour in the room learning about slavery.

Now, as historians, we thought we’d done a great job. We’d really researched our sources. We thought we had a diverse range of views. We thought we had got that real balance of including things like the Haitian Revolution to make sure it wasn’t that single story narrative of slave saviour.

However, from speaking to the students, while they can appreciate the work that’s been done, one said to me, Miss, to hear about your ancestors and you look around the room and nobody looks like you, you feel that sense of shame or that spotlight on you. And then she also said, it’s all right for everybody else. They leave thinking they’ve had a great history lesson. Wasn’t that interesting? But for me, that lesson can stay with me for weeks and months. And I find I’ve got no one to talk to.

So that was something really important when it comes to decolonising your curriculum. You really need to think about your audience and how they might feel. So we’ve used a lot of pupil voice when we’ve come up with tweaks to our history curriculum. And I will say the work has started with history, and I’ll give you some examples of what we’ve done.

So, for example, Year 7, they learn about medieval England. They love it… Black death, war, all that. They lap it up. But we also have introduced a unit on Mansa Musa, the richest man that ever lived. And to learn about that golden age that was going on in Mali at a time when we had really regressed, really gives that context, and also predates some of where they believe Black history starts.

The other thing we’re really trying to do is to also include other civilisations. It’s not just about Black history. Interestingly, we just appointed an ECT who’s Australian, and she delivered… she actually trained with us… and she delivered our World War I unit, which we thought was amazing. We’d included pictures of different regiments and Sikh soldiers.

And she said, you know what? You’ve not mentioned a single country in the Southern Hemisphere. And we hadn’t. And sometimes, you just need that lens, someone to look over what you’re doing to make you realise what’s missing. So that’s the second piece of work that we’ve done.

We currently have a huge working party in our school because we’ve made it part of our professional development. I’ve got 51 members of staff… teaching staff… who have joined a decolonisation working party. And I feel now we can really get the work done.

So we’re looking at things like connections across different subjects. History, again, we teach the slave trade in Year 8. Then we teach the Industrial Revolution in Year 9… workshop of the world, how great was Britain. Where was that cotton coming from? Just making that simple link.

And we’ve introduced something in our curriculum called stop, think, and link so that we as teachers also stop the lesson to make sure those dots are joined and students make that connection, that, yes, we were the workshop of the world, but at what cost, and at what price to humanity?

We’ve also done things like look at who is delivering the work. And I think this is, again, an uncomfortable piece of work. I have had to sort of look at myself and think, yeah, I’m a mixed race educator. I know everything. I’m brilliant at this. I understand decolonisation. Well, actually, I’m also the product of my lived experience.

Every single one of my history teachers from primary up to university level was white and predominantly male and older. So I need to appreciate that my own education was not decolonised. So sometimes it’s about looking at yourself and what learning or unlearning you need to do as a deliverer.

I’m really hoping that with that combination of a huge staff drive to work together, to have student voice as the audience of the curriculum, that we really make true decolonisation, which is not just adding more in. It’s nuanced work where we make adjustments to widen that lens, that holistic approach where everybody… the marginalised, the ones that have had their history rewritten, the ones that have deliberately been pushed aside… are all there. And our students will see themselves in that curricula. That will truly produce global citizens and really help that sense of belonging. Thank you for listening. 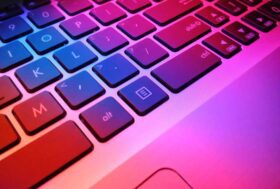