Effective marking strategies for learners: What helps, what hinders? The abandonment of national curriculum levels has created an assessment upheaval in our schools. Alongside the difficult process of developing new internal systems, there has been a renewed focus on formative assessment and assessment for learningKnown as AfL for short, and also known as formative assessme... (AfLAssessment for Learning (also known as formative assessment)...) (Black and Wiliam, 1998a, 1998b). However, in response to a continuing emphasis on external accountability and a desire to demonstrate tangible evidence of good practice, many schools have also introduced complex forms of marking to support their formative assessment. ‘Tickled pink’ and ‘green for grow’ comments are used to guide students’ learning, and the ‘purple pen of power’ has become the weapon of choice for enabling students to make improvements in their work.

However, reports from both the Education Endowment Fund (Elliott et al., 2016) and the Independent Teacher Workload Review Group (2016) are critical of marking processes that rely on teachers spending huge amounts of time writing lengthy comments in different-coloured pens, arguing that there is very little evidence that outcomes for students are improved in the long term. Working as an inclusionAn approach where a school aims to ensure that all children ... consultant, I was interested in how the marking process works for students, and particularly for those with literacy difficulties, who may struggle to read their teacher’s comments. In this short case study, I explored how one Year 3 teacher used marking to develop students’ writing, and looked at the use students made of the written comments they received. Six students were selected to represent lower-, middle- and higher-attainment groups within the class. Each student was asked to identify three pieces of marking that had helped them to improve their work, and three pieces where marking had been less helpful. These were discussed in relation to work in their literacy books.

I analysed comments from the interview with the teacher and marking comments selected by the students, using Searle and Dillon’s (1980) categorisation. The students’ thoughts and responses were also analysed in relation to the following:

The teacher was very much marking for improvement, with planning and assessment closely based on the ‘steps to success’ criteria used by the school. When asked about what they looked for in a ‘good’ piece of writing, they almost exclusively concentrated on the technical aspects. Of the comments selected by students, 60 per cent addressed technical issues. To some extent this emphasis was influenced by the focus of the school at the time. Helping students use spelling, punctuation and grammar (SPaG) knowledge was seen as a way of improving their writing levels.

In addressing different abilities, the teacher said they gave more points for improvement to the more able students. They felt that, with the lower-attaining students, it is important to ensure that they are secure with learning before moving on. The teacher explained that she had needed to differentiate for abilities more at the beginning of the year, but was able to do more whole class teaching as the year progressed and students’ learning developed. The teacher recognised that it is sometimes more effective to have a conversation with a student than try to write difficult comments, and uses a ‘verbal feedback’ stamp to indicate when this has happened.

The students all had positive attitudes to writing, although the higher-attainers were particularly enthusiastic. One high attainer said: ‘I really want to be a book writer when I grow up’, but when asked what they found difficult, responded: ‘Sometimes there are all types of sentences that you have to do. Like there is a sentence that I have to do in some of my writing that’s called a multi-clause sentence with subordination. I find that a bit hard… My mum and dad don’t know what it is.’

Interestingly, the lower-attaining students could not identify any particular difficulties, while others identified specific technical aspects. Only one student said they had difficulty coming up with ideas.

Instructions on how to improve technical aspects of their writing were identified as helpful. Evidence in books showed that students had been able to respond to these comments and then apply the skills in subsequent pieces of work, with the teacher highlighting these in the marking. Questions about the content of the writing were also helpful; for instance, the teacher writing ‘Why?’ or ‘Why is this a problem?’ had encouraged students to add more detail. Students also identified ‘tickled pink’ marking as helpful in reinforcing what they had done correctly.

A lower attainer said: ‘Cause you look and see if you’ve got pink, and it be like, “yes I got pink”, but if you got green like you can always try next time.’

Students had not always responded directly to marking comments, by ‘fixing’ the marked piece, often commenting that they had not had time. However, there were a number of examples where the marking of subsequent pieces of work showed that students had taken note of points made. For example, where one student had written out rules for inverted commas, the teacher had praised their use in the next piece of work.

Comments the students found less helpful were sometimes about places where their writing had become muddled or illegible, and it may not have been clear to the teacher what they were intending. Occasionally, students had not understood what the teacher meant. One lower attainer had not understood what ‘e.g.’ meant, but had noticed that every time the teacher used it, s/he gave an example, so had worked it out. Occasionally, students had been asked to write examples – for example, of similes or multi-clause sentences – and though they had been able to do this at the time, they said they were still not completely confident about them.

Although this was a very small study, it showed that students were able to reflect on their teacher’s marking, and they appeared to be using it effectively to make improvements in their writing.

A higher attainer said: ‘I usually look through my book before I go on to my work, to see if there’s anything I need to improve in my next bit.’ For the lower attaining students, marking comments are often mediated by the adults in the classroom. However, subsequent pieces of work demonstrated that they had been able to apply this learning. The teacher was very systematic in her approach, and overall the quality of writing seen was of a good standard for Year 3.

If marking is of value, and students are able to use it to improve their writing, then teachers need to find a way to implement it in a time-effective manner. AfL and good teaching have been demonstrated to have a greater impact on lower-ability students and those from disadvantaged backgrounds (Black and Wiliam, 1998b; Sutton Trust, 2011). So, although higher attaining students are able to make better use of marking, this study concurs with previous research that what happens in the classroom has the greatest impact on lower-attaining students. Peacock (2016) argues that we need to widen the scope of marking and AfL feedback in general, to be more inclusive of the wider aspects of writing. This is something to be considered for further research.

Searle D and Dillon D (1980) The message of marking: teacher written responses to student writing at intermediate grade levels. Research in the Teaching of English 14(3): 233–242.

Sutton Trust (2011) Improving the impact of teachers on pupil achievement in the UK – interim findings. Available at: https://www.suttontrust.com/researchpaper/improving-impact-teacherspupil-achievement-uk-interimfindings (accessed 2 July 2017). 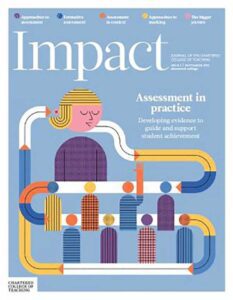