Growth headset? Exploring the use of virtual reality and augmented reality in schools 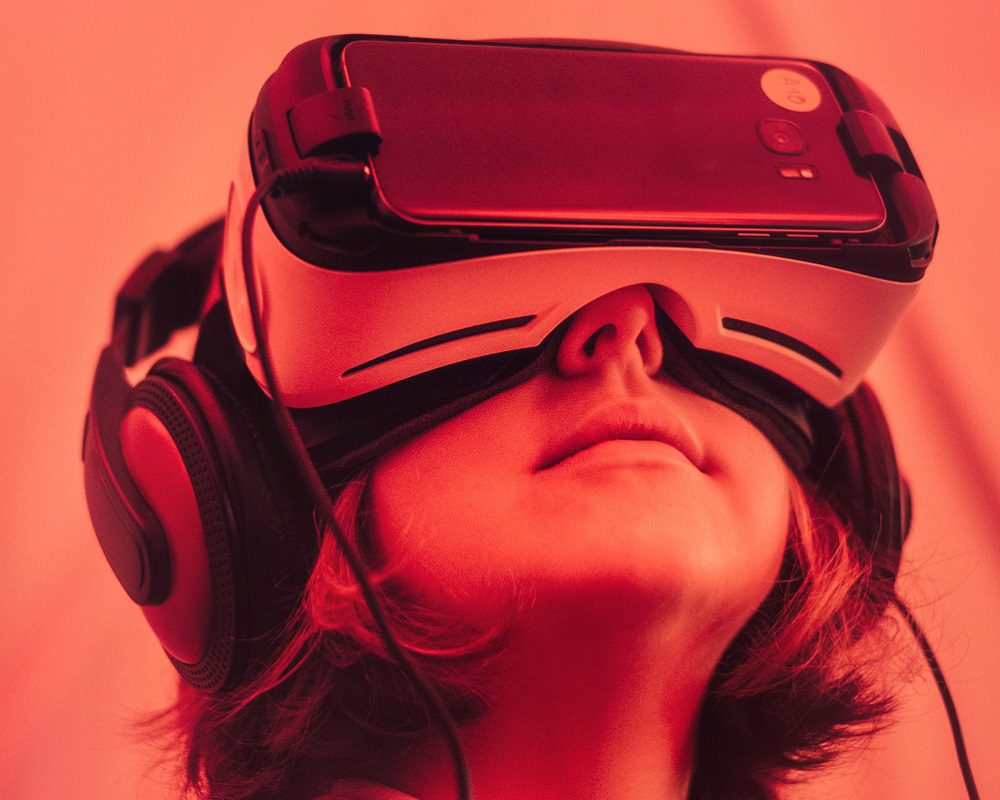 The use of Virtual Reality (VR) and Augmented Reality (AR) technology in education is nothing new; the first recorded use was a flight simulator used to train US Air Force cadets in 1966 (Page , 2000). However, it’s fair to say that VR and AR technology has not yet brought about the revolution we all thought was coming as we watched Pierce Brosnan strap a headset to his gardener in 1992’s The Lawnmower Man. A recent systematic review of VR in education noted that ‘the history of commercial VR systems has thus far largely been one of failure’ (Kavanagh et al., 2017).

However, as anyone who attended the 2018 British Educational Training and Technology (BETT) show will attest, VR/AR is in the ascendant. This summer, Damian Hinds lent his vocal support, saying ‘I’ve been fortunate enough to see technology being used in revolutionary ways. Students are able to explore the rainforest, steer virtual ships or programme robots from their classroom, while teachers are able to access training, share best practice with colleagues and update parents on a pupil’s progress without being taken away from their main focus – teaching’ (Department for EducationThe ministerial department responsible for children’s serv..., 2018).

This paper outlines some of the key findings of a case study exploring the use of VR and AR in schools, in an attempt to determine the extent to which the walk matches up to the talk. To explore the study’s methodology, findings and limitations in full, readers are encouraged to access the full report online (Mannion , 2018).

In VR, the user is immersed in an artificial environment through the stimulation of the vision and hearing. This can either be a computer-generated simulation (as in The Matrix), or a recreation of a real-life environment through the use of a 360° camera. In contrast, AR technology (sometimes referred to as mixed reality) aims to enhance real-life surroundings with digital components superimposed on them.

In November 2017, a research project was launched at the annual conference of the Independent Schools Council (ISC) Digital Strategy Group to explore the use of VR/AR in schools. Headsets were loaned to seven schools during the Spring term 2018, who experimented with the technology over a period of weeks; programmes used included Google Tilt Brush (a 3-D art studio), Google Expeditions, Google Earth, a tour of the International Space Station, BBC Home – A VR Spacewalk, YOU by Sharecare (a simulation of the inside of the human body), and Richie’s Plank Experience. Some schools used the technology in timetabled lessons, while others ran sessions with small groups of ‘digital leaders’ outside of lessons.

In each school, a sample of students and teachers competed a pre and post-intervention survey, and post-intervention interviews. In total, the data collection comprised 132 student surveys, 32 student interviews, 18 teacher surveys and 9 teacher interviews. All interviews were semi-structured, to enable interesting lines of conversation to be pursued. Student and teacher interviews were transcribed in full and analysed using the six-step approach to inductive thematic analysis set out by Braun and Clarke (Braun and Clarke , 2006): 1) familiarisation with the data; 2) coding; 3) searching for themes; 4) reviewing themes; 5) defining and naming themes; and 6) writing up.

The impact of VR/AR on learning

The most common theme to emerge from the teacher interviews was how VR/AR can be used to facilitate learning. Comments mostly related to the role of visualisation in learning; the link between seeing things in 3-D and understanding; immersive/interactive learning environments; and the interplay between these ideas (visualisation, immersion, interactivity) and memory. In particular, several teachers commented on the importance of being able to visualise concepts, as can be seen in the following excerpts:

Researcher: Can you think of any ways in which students can learn things through VR that they wouldn’t be able to learn in other ways?

Teacher: I think a good example is being able to view the lungs. Things where children find a concept tricky to visualise. By being immersed in those environments, they can get a sense and an understanding, they can grasp concepts that they couldn’t grasp before.

The relationship between immersive experiences and memory also emerged several times in the teacher interviews:

I think this whole idea of memory… you know, there are experiences we have in our lives that we will always remember and that we can always recall… if you make a lesson memorable, and the kids pay attention all the way through, then it will burn into their deeper knowledge. And [VR] can do that. I mean, if you’ve stood on top of the Hoover Dam and looked down both ways, you’re going to get dams… and if you can drop down and see the hydro-electric part, you’re going to get that… you’re not going to have to bone that up the night before the exam.

This idea of memorable learning through visualisation within immersive environments is well documented in the research literature (Cheney and Terry , 2018); (Bronack et al., 2006); (Picard et al., 2017). However, in this study some teachers expressed scepticism about the relationship between VR/AR and memory:

I’m a little bit sceptical if I’m honest… I see that having an experience helps them remember things better… and if they’ve had a memorable lesson it generally means that they will remember it. Whether they remember the right stuff is another question, but at least it creates that memory pathway. But I am not convinced yet and I have not seen any evidence yet, apart from the spatial side of it, that it creates knowledge.

When asked how VR/AR can be used to facilitate learning, teachers often cited subjects deemed to be “more visual” such as Geography, Science and History. The view was also expressed by some teachers that VR/AR may be of particular benefit to students with Special Educational Needs and Disabilities (SEND), as can be seen in the following excerpt:

Students that struggle with concentration… children that struggle with sensory issues… if you can immerse them in a virtual world that is educational: massive impact. Absolutely huge. You’ll do something with them – say electronic theory – and you’ll lose those children within about five or ten minutes… But if you immerse them, they’ll stay in there for as long as they can… I think because it’s on a computer they enjoy doing it… So I think the biggest impact I’ve seen is for [children with] special educational needs. It’s quite phenomenal.

Teachers also identified the value of VR/AR in terms of non-cognitive aspects of learning such as empathy, careers and seeing the world or going on virtual field trips. For example, one teacher gave the following example of how VR/AR can be used as an ‘agent of empathy’, which can in turn be used to deepen learning:

We [used an application] that takes you back to the exact day of the Wall Street crash, and you glide through almost like a ghost and you see people throwing themselves out of windows and they’re frozen in time. And people are collapsed on the floor crying, and you really get the idea of the emotional content of that moment, rather than just the statistical content of that moment. Not just how much money was lost on that day and how many people were affected and why it happened and all that… So it’s not empathy in itself, it’s that the empathy dimension allows you to understand the consequences and the meaning of an event more fully.

However, when asked about the claim made in a TED talk that VR is the ‘ultimate empathy machine’ (Milk , 2015), some respondents expressed scepticism, as can be seen in the following exchange:

I’ve heard a lot of positive things about the creation of empathy, and I am very sceptical about that… [they say] it’s a wonderful experience to be able to teach students to be empathetic like what’s it like to live in a slum. And I feel that that just can’t be right because it’s a bit like giving someone a seat and saying “this is what it’s like to not be able to use your legs”, or “this is what it feels like to not be able to hear”. The students will never be able to know that because that’s something that’s really personal, and I think that we dumb down the experience by suggesting that in any way we can replicate it. It might give an insight, but it doesn’t create empathy in and of itself…

Several students and teachers expressed a sense of ‘healthy scepticism’ with regard to the use of VR/AR in schools. Concerns included logistical/practical issues; the cost of equipment; the fact that the technology soon becomes obsolete; and health and safety concerns about feeling dizzy, or the need to physically supervise someone who is immersed in a virtual environment. However, the most common complaint from teachers was that the content currently available is of limited use in schools. This can be seen in the following comment from a teacher who was asked: ‘If you could have the ear of tech developers, what would you ask for?’

If they looked at the curriculum first. What are people trying to teach? If they looked at how it is currently being taught as a starting point rather than saying “oh this could be quite cool”. At the moment they seem to say “well we’ve got Expeditions, let’s give it to Geography because that’s the closest thing we’ve got to Expeditions. Rather than starting with Geography and going “Right, let’s look at what’s on the syllabus for GCSE and A level”… I think there is lots of stuff that could be useful but it just needs to be led by learning to start with. That’s the key thing – how is this better than using pen and paper?

Currently, it costs around £1500-2000 for a VR headset and a computer powerful enough to support it, and both have a limited shelf life as new models are brought to market. The field is evolving fast; the technology gets more powerful and more affordable each year. However, at a time of cuts to school budgets, it is unlikely that schools will invest in this technology unless there are clear gains to be made in helping students learn more effectively. A clear finding to emerge from this study is the need for tech companies to work with teachers and curriculum providers to create relevant content that can be used seamlessly in lessons. The extent to which VR/AR will be embraced by schools in the coming years rests on this critical issue.

This study was commissioned and funded by the Independent Schools Council Digital Strategy Group. The equipment used in the study was loaned free of charge to schools on a short-term basis by SystemActive Ltd, with financial support from Microsoft, Intel and Hewlett Packard.