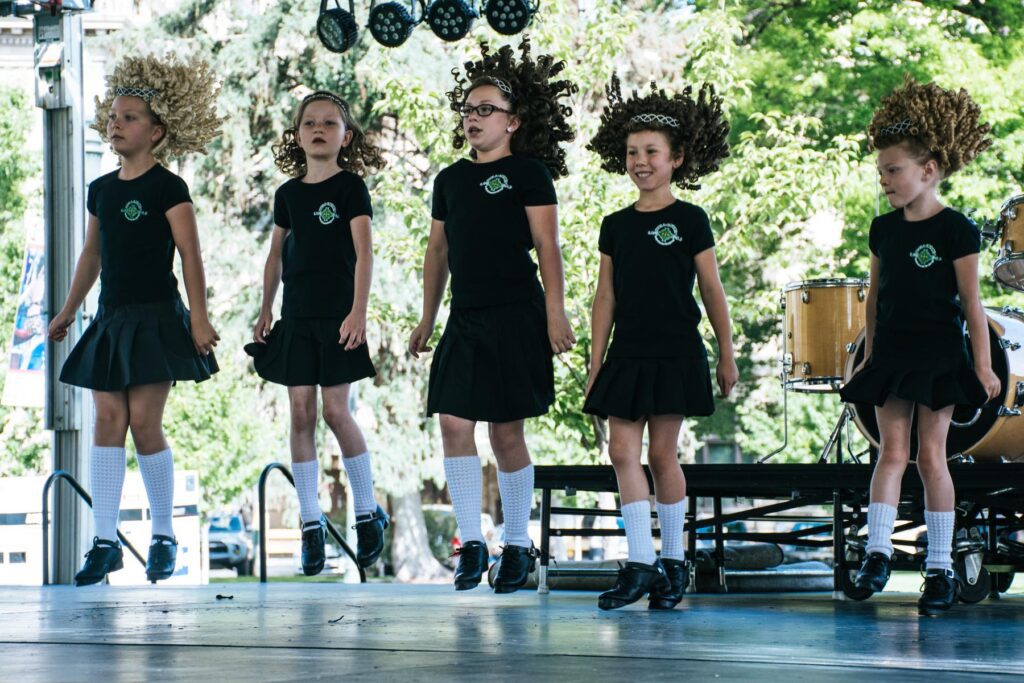 This study is based on work undertaken as part of the Masters in Education degree by Isaac Howarth at Edge Hill University in 2015.

Over the course of three months, I worked with a group of 19 children in Year 5 with low prior attainment to see what effects there would be after a term of direct and regular instruction in reasoning strategies. Pupils were explicitly taught reasoning skills and made aware of reasoning processes during their daily maths lessons.

Research collated by the Education Endowment Foundation indicates that teaching metacognitive strategies can have a major impact on the rate at which children learn (Education Endowment Foundation, 2017). Research in the underlying theory indicated that metacognition can be learned by hearing and taking part in discussions where concepts and logical rules are discussed, hence choosing to teach reasoning skills. Taking time to teach these thinking skills would help children make better progress by concentrating on the aims of the National Curriculum: to develop reasoning, fluency and problem solving (Department for EducationThe ministerial department responsible for children’s serv... More, 2014).

There has been a perception that teaching children to reason in maths lessons is a way to challenge more-able children – that has a hidden implication that is it not always necessary for all children. However, there is a relationship between children’s mathematical reasoning and their achievement in maths at the end of Key Stage 2 (Nunes et al., 2009). This makes teaching reasoning a vital component of a quality maths education for all children.

The baseline results indicated that there was a noticeable gap in the achievement of girls compared with boys. It was suspected that some girls had started to turn away from maths because they felt maths was ‘not for me’ or may have lacked confidence to speak up in a maths lesson.  There is research indicating that certain conceptions of what it means to ‘do maths’ can affect a child’s eagerness to learn it. This may mean a child may be reluctant to contribute ideas or may have a fear of ‘getting it wrong’ because they think correct answers are valued in maths – even though the conjecturing, inquiring and reasoning are also important parts (Department for Children, Schools and Families, 2009). For this reason, the role of the teacher’s dispositions is considered in the conclusion of this study.

From October to December, the children were gradually introduced to low-threshold, high-ceiling questions to make reasoning accessible to all. These questions were designed to be open-ended so they are highly accessible to children across the range of prior achievement, but also permit more complex and intricate responses to offer challenge (McClure, Woodham and Bothwick, 2011).

Reasoning and pattern recognition were also included as an integrated, regular part of the lesson, rather than being saved for the end as a ‘challenge’ or reserved for a plenary. Children were also expected to continue reasoning about familiar topics during warm-up questions to ensure that procedural fluency was still underpinned by conceptual understanding.

As a starter activity, each lesson began with five questions aimed at developing fluency and understanding, with the fifth being a low-threshold, high-ceiling reasoning question designed to challenge conceptions about mathematical properties. Initially the questions were ‘What’s the same/what’s different?’ style or ‘Which is the odd one out?’

When this same question was asked three months later, the responses were more sophisticated, with some children recognising that the three polygons all needed base and height measurements to find their area. This was following a lengthy sequence of lessons on what area means, and how it is constructed and represented. However, because of their enhanced reasoning skills, the children were able to handle more complex concepts because they knew how to look for detail in an idea and categorise properties.

Thinking aloud as I gave more sophisticated responses was a powerful way to model being a mathematical thinker. As children heard me think aloud more, they began to adopt the habit, which was beneficial for when they would evaluate their peers’ ideas. This in turn provided a further opportunity for mathematical reasoning and critical evaluation.

When it came to more restrictive forms of reasoning, the questions were about geometric properties because that was a topic which lent itself to visual representations and the children were already familiar with making generalisations about a collection of properties.

A gradual and growing understanding

Initially, the questions or statements provided for discussion were more straightforward, such as: ‘Always, sometimes, never: A square is a rectangle’. Many children understood why a square is always a rectangle using a more precise definition of rectangle. However, reversing the question, ‘Is a rectangle a square?’, was harder to pick apart. Many children wanted the same answer as before because they believed the process worked the same both ways (a commutativity of sorts), but when I asked for examples of rectangles that were squares, and then examples that were not squares, things changed. They came to realise that a rectangle is only sometimes a square, yet a square is always a rectangle. This re-thinking of how maths works was a powerful tool for getting children to challenge their own thinking and provides examples to help refine their thinking.

For this type of dialogue to take place, the children were taught sentence structures that allowed them to debate mathematical ideas and they were expected to respond to one another’s idea in an evaluative way (Mercer and Howe, 2012). Using simple phrases like ‘What do you think of…idea?’ or giving children ways to respectfully disagree by saying, ‘I disagree/agree with… because…’ made critical thought non-threatening and clarified how conjecturing and testing an idea could lead to its refinement through group talk where everyone knew the rules of discussion.

Amongst the results, it was noticed that EAL children ended up achieving higher scores than non-EAL children and also making a greater gain in reasoning. The same was true for girls, who reversed the gap with boys in both achievement and gains. All children made a substantial amount of progress to reach levels of achievement in line with national averages. There is a positive indication that explicitly teaching mathematical reasoning can also raise the achievement of other groups, as it did with EAL children and girls. Some suggested reasons for the improvements made are discussed below. 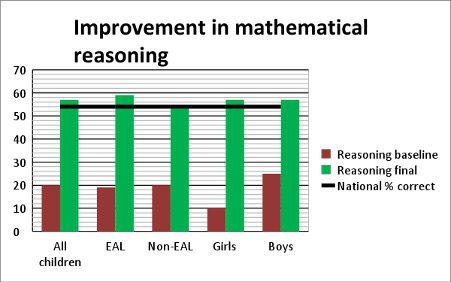 The progressive difficulty in the questions posed provided a gradual increase in the level of challenge, and the modelling of mathematical thought allowed children access to the mind of a mathematical thinker. Over time, they internalised mathematical thought structures and would use them to evaluate their classmates’ ideas. This meant direct teaching of language structures for reasoning was necessary, which likely explains the large improvement in EAL children’s performance, since the academic language of mathematical reasoning is unlikely to be acquired outside of a formal school setting. The language of reasoning is highly specific and highly structured, enabling children to learn it quickly.

The gap closing between girls and boys may have been due to a shift in attitude towards what it means to ‘do maths’. The focus shifted towards more reasoning, re-thinking and evaluating. In lessons, collaboration and discussion were valued because they were explicitly planned for, in turn making more time for deeper thought (Mercer and Howe, 2012). This was a big shift in attitude for some boys, who can often be taught that ‘being good’ at maths is about competing for correct answers.

Likewise, more emphasis on re-working a response meant there was less fear of being perceived as slower, ‘wrong’ or ‘losing’ (Department for Children, Schools and Families, 2009). Reducing the competitive element in lessons may have been advantageous for both girls and boys who had learned to be fearful of maths (Department for Children, Schools and Families, 2009), but appears to have had more of an impact on girls.

The short-term nature of this project meant that it remains to be seen if the gains are sustained in the long run; however, it also shows how quickly the gains can be made.

This case study has shown that directly teaching mathematical reasoning by incorporating low-threshold, high ceiling questions into regular curricular lessons and providing scaffolds to develop critical discussion adds much value to children’s learning in mathematics. This study demonstrates that it is possible to teach reasoning alongside fluency, rather than viewing reasoning as an additional challenge. By including reasoning even with basic facts and properties, children come to a richer and better connected understanding of those core facts and properties.

The short-term nature of this project meant that it remains to be seen if the gains are sustained in the long run; however, it also shows how quickly the gains can be made. This project has also demonstrated the influence a teacher has over the classroom climateThe social, emotional, intellectual and physical environment... More and children’s attitudes, which is also influenced by how they construct teaching sequences and what they value as a ‘good’ mathematical response and what they espouse as the qualities of a ‘good’ mathematician.

Growing better learners: Are we serious yet? 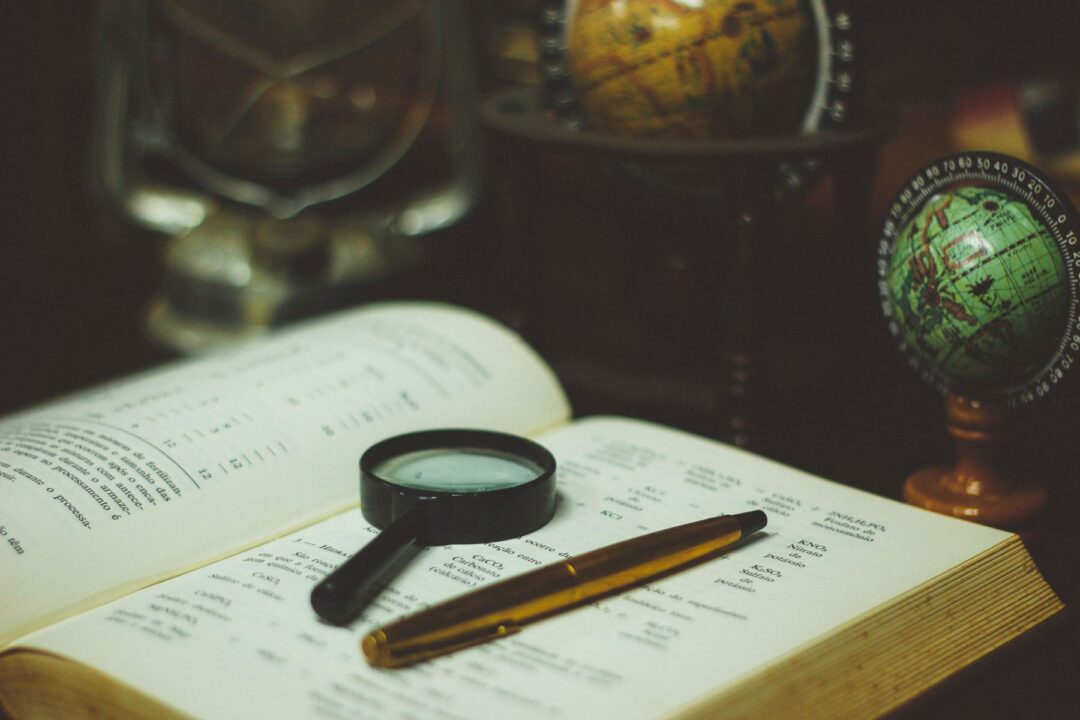 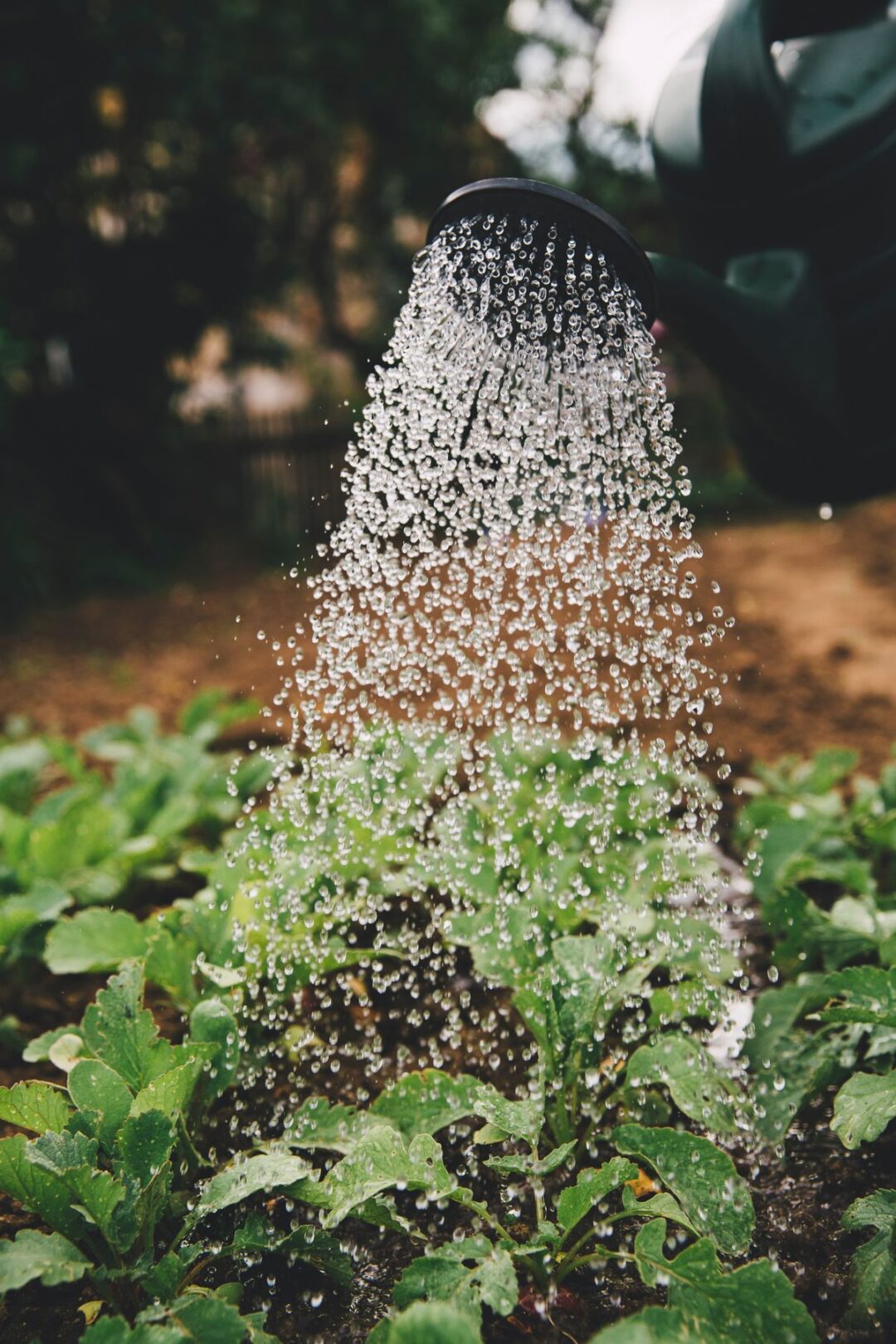 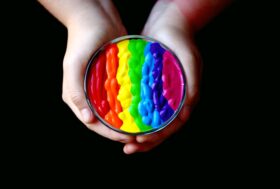 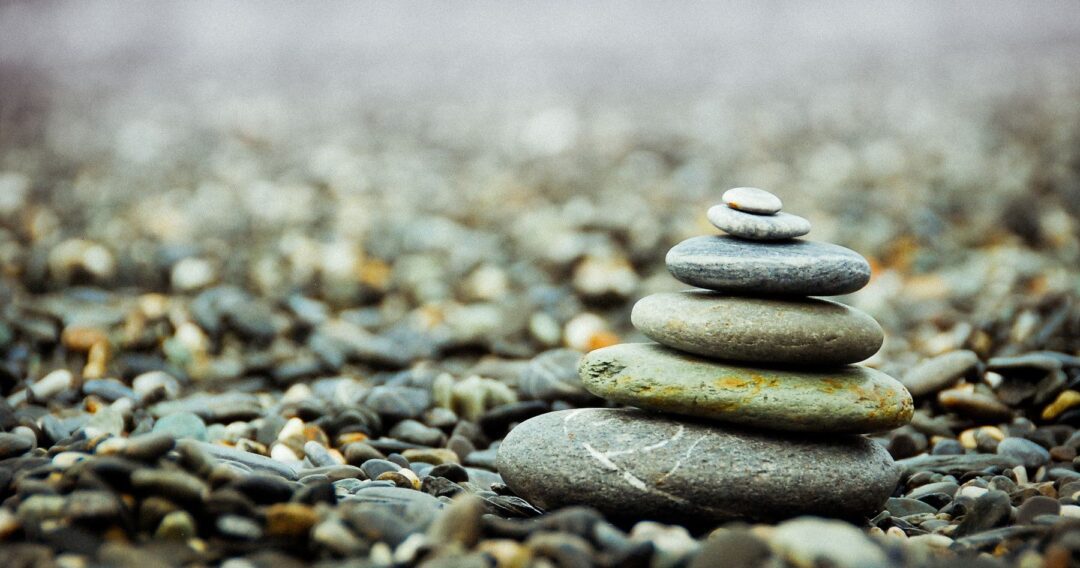 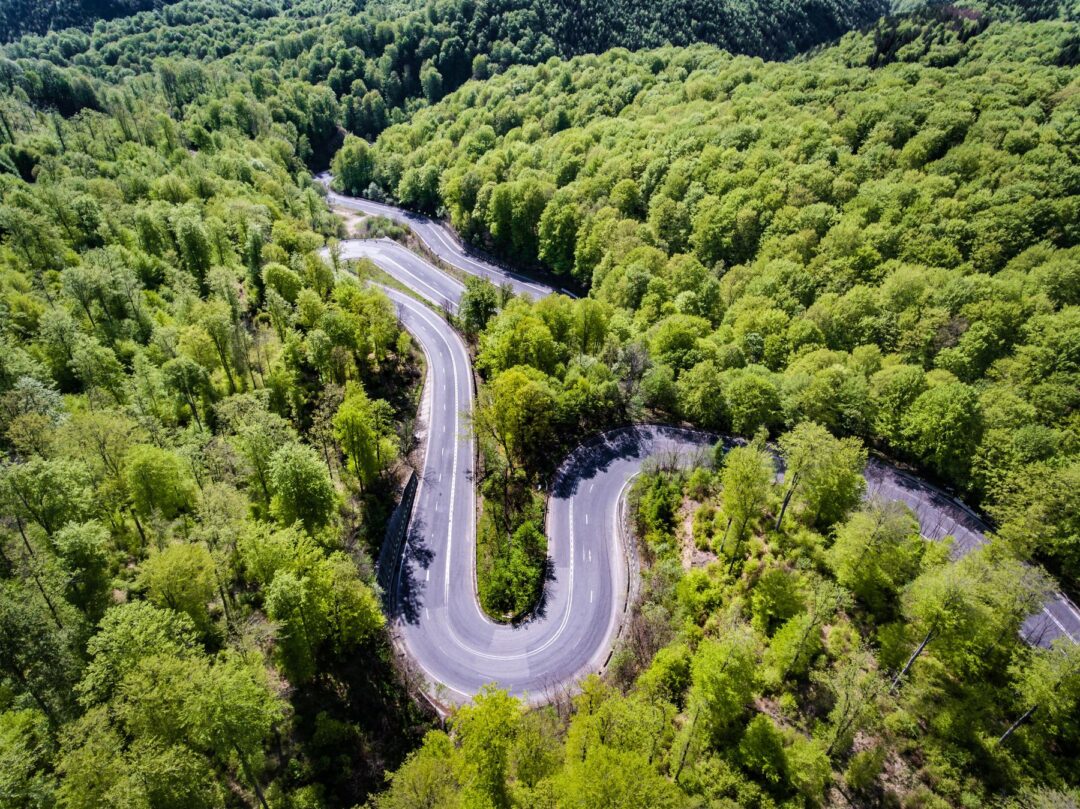